Your Prostate and Cycling

I have a middle aged prostate…

While my prostate doesn’t seem to be bothering me, I know full well that some day it will.  Trouble like prostatitis, trouble starting and stopping my urine stream and, worse yet, getting up over-and-over in the middle of the night to pee.  On top of that, it seems that most men in my family figure out a way to get prostate cancer.  So I have taken an efforts to keep my prostate happy.

Truth be told, MOST men will have some sort of issue with their prostate.

So I was excited when I ran across this news story: http://www.newsmax.com/fastfeatures/men-prostate-cycling-health-precautions/2015/03/19/id/631137/

The take home from that story:

What’s a prostate and how do I know if I have one?

Not even sure if you’ve got one?  Not sure what a prostate is or what it does?

The first question is easy.  If you’re a guy, you’ve got one.  No way around it.  The prostate is a small gland just 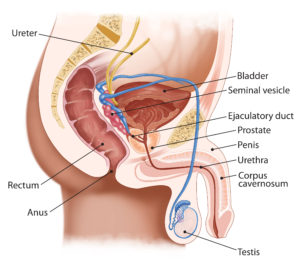 below the bladder.  The urethra runs through it as it exits the bladder on its way to the penis.  The prostate is shockingly close to the skin of your perineum (see our article on wear to put on chamois cream to find details on what the perineum is, long story short it’s the area between your genitals and anus) and, as such, suffers through a ton of pressure on normal saddles.  The role of the prostate is to secrete fluid that helps expel and nourish sperm during sexual intercourse (i.e. it’s a reproductive organ).

How to avoid trouble with your prostate as a cyclist

If you’ve got a prostate, take care of it and ride on.

Is Bicycle Sharing the Wave of the Future?

If you like to go for a bicycle ride, but simply can’t because you don’t have a bike, then you may be in luck if you live in a city with a bicycle sharing system.

Say what? Yes…there is such a thing! Bicycle sharing is not a new concept. The first example of such a program dates back to the Netherlands in 1965, where a political group known as Provo established a communal system of white bicycles that were easily accessible throughout Amsterdam. The bicycles could be freely taken and ridden throughout the city with the intention of leaving it at a designated spot for anyone else that might be in need of it. The program was short-lived as most of the bikes wound up being stolen causing the endeavor to be discontinued…but that wasn’t the demise of bicycle sharing. The white bicycles helped spearhead a program that gradually over time has spread throughout the world.

Bicycle Sharing and its Increasing Popularity

Over the past few decades, the concept of bicycle sharing has been considerably tweaked, and has greatly expanded around the world. What was once seen as a fad has become a very popular way to reduce the carbon footprint and provide access to bicycles in a complex environment. In April of 2013, there were an estimated 535 bicycle sharing programs worldwide, with approximately 517,000 bicycles for use. With the incorporation of technology such as the smartphone and GPS systems, it’s become extremely convenient for riders to locate stations where they’re able to pick up, ride and return the bikes. Think of it as the Zip Car, without having to buy gasoline.

Bicycle sharing is fairly common in Europe with programs in France, Ireland, Greece, Switzerland, Italy and Belgium among many other countries, with the largest in the world being the Wuhan and Hangzhou Systems in China. Some systems, such as the one in Brisbane, Australia have vending machines where you can actually rent bicycle helmets!

In the U.S., bicycle sharing can be found in major U.S. cities such as Boulder, Denver, Washington D.C., Miami Beach, Boston, Minneapolis, Kansas City, Columbus, and New York City. While it’s seen as a way of promoting green energy and helping to reduce auto traffic, the bicycles are mainly available for short-term trips…you can’t really rent one for a weekend, and in most cases you’re only allowed to ride them within the city limits.

Some programs are called “Bike Libraries”, where a bicycle can be used for no charge or in some cases a nominal fee or deposit, over an elongated period of time This works especially well if your car breaks down and you need a bike to get to work, with the stipulation that you’ll take care of the bicycle (keeping it locked up, etc.) during that time.

In some U.S. cities, bicycle sharing also gives cyclists the ability to have a multi-purpose pass, allowing them to use the bike, in addition to mass transit systems such as buses and trains, with the intention of returning the bicycle at the end of their excursion. Some riders have stated that this gives them greater freedom to explore when they normally wouldn’t have a chance to, especially in a crowded city.

The added plus is that with bicycle sharing, more cities are adding more bicycle lanes and paths which help increase overall pedal traffic. New York City, for example has a total of 570 miles worth of bike lanes in all five boroughs, which has made it much easier for bicyclists to get around and already congested city. The addition of all these bike lanes in major metropolitan areas also improved the quality and safety of the ride, as bikes no longer have to risk making contact with cars or pedestrians.

So, if you don’t own a bicycle, then this might be the way to go if you’re up for a ride.